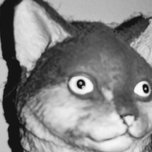 By Commander McBelch, October 13 in Free-For-All